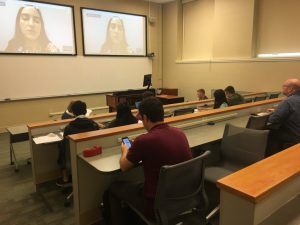 On October 10, 2018, Professor Adriana Vazquez of UCLA gave the inaugural talk for this year’s Proculloquium Classicum series of teleconference and in-person guest lectures, on the theme of “Classics Beyond Europe.” Her talk focused on Classical imagery of giants and autochthony in the national epics of South America, particularly O Uraguai by José Basílio da Gama — and how these epics reveal a pessimistic reading of Vergil’s Aeneid a couple hundred years before the famous “Harvard School” of Classics scholarship! Her talk was titled “Giants in a Landscape: Classical Images of Autochthony & Gigantomachy, Towards a Conception of National Identity, in Jose Basilio da Gama’s O Uraguai.” 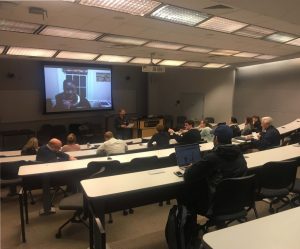 On November 15, 2018, in the second event in our Proculloquium Classicum series “Classics Beyond Europe” on November 15th, Professor Sasha-Mae Eccleston of Brown University gave an enlightening and powerful talk on the intersections of race, colonialism, and the Classical tradition in Suzan-Lori Parks’ theatrical trilogy Father Comes Home from the Wars. Her Q&A period turned out to be a lively discussion of issues both in the plays and in society as drawn out by the plays. This event was co-sponsored by the Wake Forest University Office of the Provost, the National Endowment for the Humanities, and the Wake Forest University Humanities Institute. 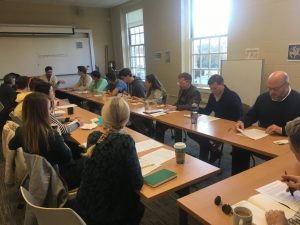 On November 19, 2018, Professor Stephen Blair spoke with classics students and faculty about his research on the role of rationalization in ancient historiography in his talk titled “The Age of Miracles: Rationalizing the Past in Early Roman Historiography.” 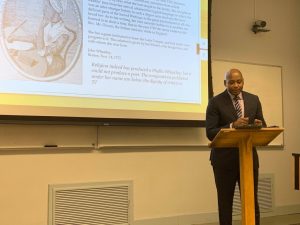 On February 7, 2019, Professor Patrice Rankine gave a talk on Classics and white supremacy, for a crowd of more than 40, the largest on record for a Wake Forest Classics event. He focused on the social, public creation of an intellectual and cultural “Commons” in ancient Athens, early America, the 1980s, and 2019. In each period, Professor Rankine argues, signal texts and moments — from Eratosthenes’ affair with the wife of Euphiletus in Lysias’ first oration, to Thomas Jefferson’s racial animus against the poetry of Phyllis Wheatley, to Wake Forest University closing its campus during the Civil War so that students and professors could fight to perpetuate slavery, to Ralph Northam’s medical school’s dalliances with blackface, to Mary Frances Williams’ racist aspersions against Professor Dan-el Padilla Peralta — show that it is our words and actions that create the Commons from which we draw our understanding of our world, our society, and our selves. The title of his talk was “Caught in the Act: The Classics, White Supremacy, and the Quest for a New Commons.” 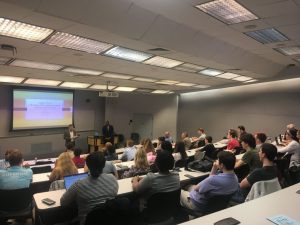 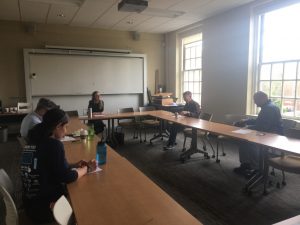 On April 9, 2019, Professor Lather spoke about an article she is working on that explores the intersections between Homeric warriors and the most mundane, minute substances that surround them–dust, dirt, and sand–arguing that the presence of these materials in epic serves to highlight the fragility of the human body and intellect. The title of her talk was “Epic Matter: Homeric Dust, Sand, and the Limits of the Human.” 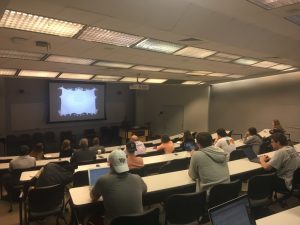 On April 17, 2019, Professor Shelley Haley took us through a careful investigation of how modern prejudice can misrepresent ancient perspectives on ethnicity and human difference.  Focusing on the Latin word Aethiops, “Ethiopian,” she demonstrated that 20th-century translators and dictionary creators have inserted their own racism into un-racially-marked original texts, even going so far as to translating the neutral term Aethiops with racist slurs.  The title of her talk was “‘It’s What he Intended’: Translation, Authorial Intent and Racism in Classics.”